So way back in May of 2011, we were invited to the wedding of Paul’s cousin back in his hometown of Lomza, Poland. With a population of around 65,000 people, it’s a little smaller than where I grew up in the Chippewa Falls, Eau Claire area of WI. Being this was my first time out of the country on a different continent, needless to say I was quite excited about what I was going to experience! More importantly I was finally going to see where my other half grew up and started his life.

As the day drew near and it was finally time to leave, we were all packed and ready to go! Up, up and away we went! As it was 6 years ago, I do not remember where we had our connection flight or any of the specific details, I just remember that we were in the air for almost 10 hours which at the time seemed like forever! (We will get more into our much longer flights down the road!)

We touched down in Warsaw, Poland (pictures of Warsaw will happen later as we spent more time there on our way back from traveling!) and I can remember it was late afternoon and the skies were clear and I saw what looked like I was landing in the middle of Wisconsin! There was GREEN everywhere, and gently rolling hills with tons of trees and farmland. The only thing that stood out like a sore thumb to me was all of the European architecture that I had been waiting what seemed like a lifetime to see. But first, we needed to get our passports stamped and find our way out of the airport!

Lomza is about a two-hour drive north of Warsaw so Paul’s cousin, Ewa, was waiting for us at the airport with huge hugs and a smile from ear to ear! Outside of Paul’s immediate family, this was the first relative I was able to meet! We gathered our luggage and hit the road! Again on our drive up, I was surprised to see what looked like driving through the country where I grew up… all except the colors and shapes of the buildings.

The first few days I was introduced to relatives and became quite comfortable with my new surroundings! The wedding was only days away and there was a lot to see and do before! The language barrier never seemed to be an issue because Paul was right there to translate and let me know what everyone was talking about. From the years of listening to Polish being spoken, I could pick up on a few things  but not nearly enough to know what the conversation was about. We made it work and had a fabulous time while we did!

Over the next few days I had my very first experience of a traditional Polish wedding, and from what I remember, it was fantastic! The ceremony was at the local church, which had back to back weddings that day so as soon as his cousin and his new wife  said “I do” and made their way out of the church,  the next couple was up and ready to do the same!

After the wedding started the reception, which consisted of food, dancing and shots… in that order, every hour, ON the hour! The main drink of choice, there is only one in Poland, which are shots of vodka. There was a bottle for every two people at the reception table and when that was gone, there were always back-ups. The hero of the evening went to Paul’s mother, who snuck back in the kitchen and found a little bit of ice!! Needless to say, our table became the place to be!

After repeating the same routine until about 5 or so in the morning, it was time to go to bed. Not so you could sleep it off and give your liver a break, it was so you could take what seemed to be a short nap just to get up and do it all over again later in the day! So we did what we had to and did it all over again!

After a few short days of rest and lot’s of water, it was time to take off on our adventure! This trip, we had planned to make our way to Berlin, Prague, Vienna, Budapest and wherever else we might make it too! We had our car rented and were ready to go!

The first thing I asked to do when we stopped to fill up with gas before hitting the road was to use some money! I had never used foreign currency before and to be honest was a little scared to give it my first go! Paul explained what each dollar, or zloty in Poland was, but I just couldn’t wrap my head around anything! (to do with trying to figure out how much US money I was actually spending!) But… I bought my first coke and I survived! After that I was good to go and it didn’t take long at all to catch on!

Our first stop was a very small town just right outside of Lomza called Nowogrod, Poland. The town is centered on an area called Skansen Kurpioski which is an open air museum “gord” (A medieval Slovonic fortified wooden settlement.) which was first settled in the 9th century. Much of the original is no longer there, but there are a few artifacts on display. The town’s landmark is a World War II tank that stands overlooking the Narew River from the top of the hill. (We will spend more time here on our next visit to Poland!) 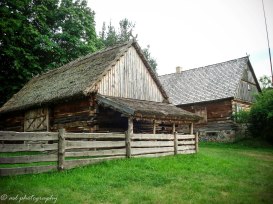 Next we were onto the port city of Gdansk, Poland. Gdansk is the 4th largest metropolitan area in Poland and its principal seaport on the Baltic Sea. This was a true beauty of a city and also when I got my first taste of true European architecture. The colors and shapes of these buildings were just awesome and I couldn’t wait to see more. The night was quickly finding its way to us so we needed to find a place to spend our first night on the road!

After a good nights sleep, our first order of business was finding the Sea! For being my very first time at “Sea”, I had no idea if the water was going to be salty or not so I did the “finger in the water” test and sure enough, it was! Come to find out, the Baltic sea is one of the worlds largest bodies of “brackish” water. This translates into: Composition from salt water from the North East Atlantic and fresh water from rivers and streams draining from an area four times larger than the Sea itself. It was salty, but not anywhere near the range of any of the oceans. And Boy was it cold!!

After spending the day walking around the downtown center and getting our Sea fix, it was time to head out! More adventure awaits! We headed east before heading back down for our (or mine at least…) castle sighting!! But before getting my first castle fix, we had to cross the Vistula River, which I must say was more exciting than I though would be! We drove the car onto a ferry and stepped out to enjoy the scenery and fresh air that only the Sea can provide! It was a fairly short ride, but altogether just awesome!

Ours was the last car!

After our ferry ride, it was time to head back south again for a bit and then turn west! It was castle time before heading to our next country, Germany. But before we head out, let me put out a few more pictures from our time on the road so you get a better feel of what Poland looks like! Remember, if you’ve ever been to the mid west, you’ve got a pretty good idea! Also remember, my photography skills didn’t kick in until our next visit in Poland, so when we get there, you will really be able to tell what a beautiful country it is. 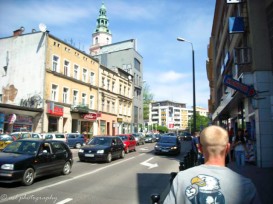 Now it’s time for one last stop before heading out to our next country! It’s CASTLE time! Malbork Castle in Malbork, Poland. It is the largest castle in the world measured by land area and was originally built by the Teutonic Knights, a German Roman Catholic religious order of crusaders in the 1200’s. The castle is a classic example of a medieval fortress and was designated a UNESCO sight in 1997. 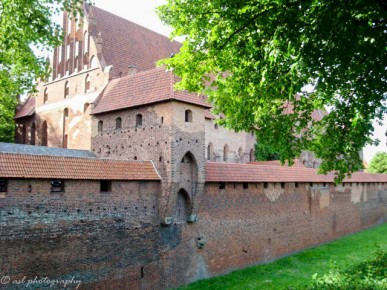 In 1466, both the castle and town became apart of Royal Prussia, a province of Poland and served as one of several Polish royal residences until 1772. During the Thirty Years’ War from 1626 and 1629, Swedish forces occupied the castle and once again from 1656-1660 during the Deluge. During the early 1930’s with Adolf Hitlers rising power, the Nazi’s used the castle as a destination for annual pilgrimages of both the Hitler Youth and the League of German Girls. Finally, during WWII, more than half of the castle was destroyed while at the conclusion of the war, the city of Malbork and the castle once again became a part of Poland. A new restoration project concluded in April 2016 leaving a much healthier castle, which to this day remains the largest brick building in all of Europe.

As one of my most favorite “sightings” here (thanks to my mother I have a love for all things religion!) was a very old crucifix that in my mind was a complete work of art in its own right… I think I just sat and looked at it for about 20 minutes, until Paul told me it was time to keep walking!

Here are a few picture of St Anne’s chapel, inside Malbork… 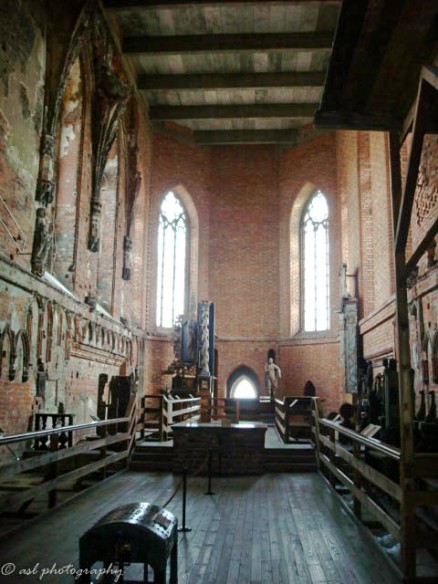 What a wonderful day it was! This was also the day that we decided we were not interested in doing guided tours, as doing our own always seemed to be the better choice. So we took the “self” guided tour with our own headphones so we didn’t have to be in a group or wait on other people. Where ever you travel, if this is an option for you we suggest you do this! Get away from everyone else so you can be your own tour guild and stay around a little longer than the others, you never know what you will find!

So this brings us to the end of our first “chapter”! I hope you enjoyed the first leg of the trip and up next on the itinerary is Germany!!

Please feel free to write me back on any suggestions you might have on what you’d like to see! More pictures, less writing (haha), more history involved or whatnot! I would love to hear from you!

Thanks again and stay tuned!