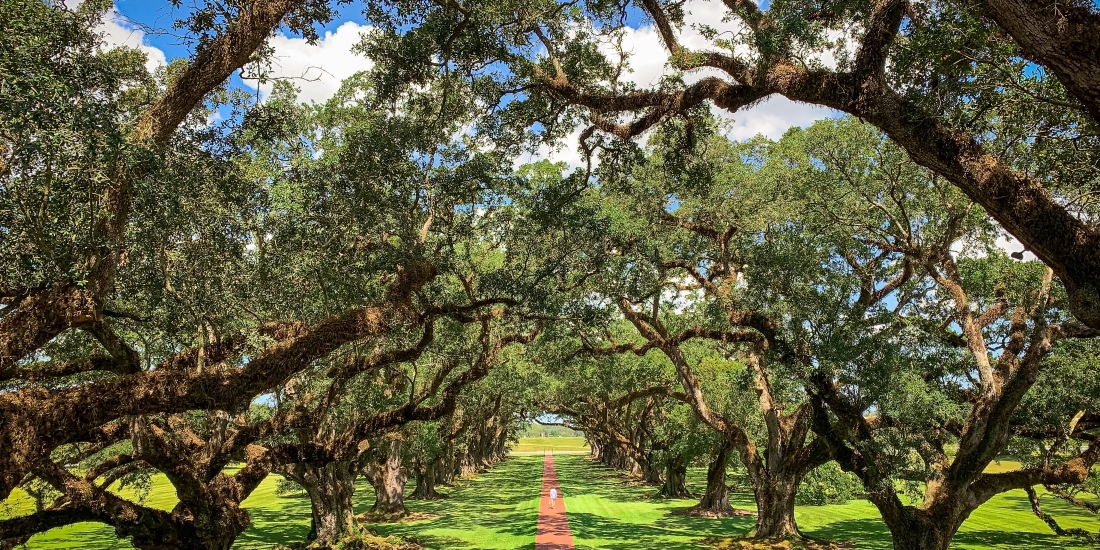 In Louisiana, counties are known as parishes.

Louisiana was officially Roman Catholic under both France and Spains rule. The boudaries dividing the territories generally coincided with church parishes. Through each change in her history, Louisiana never diviated from those primary civil divisions and they have been known as parishes ever since.

In the community of Vacherie, St. James Parish, Oak Alley is named for it’s distinguishing visual feature, the 800 foot long “alley” or canopied path planted in the early 18th century, long before the present house was built.

There are many other species loosley called live oaks, but the Souther live oak is particularly iconic to the Old South. Often able to live to 650 years, these are still at the begining of their long life ahead.

There is one Southern live oak in Alabama that has a trunk circumfrence of 23 feet, a height of 63 feet and a limb spread of 141 feet. These beautiful trees are just massive. Here is a photo of how the limbs become so heavy, they reach down to the ground for support and then start growing upwards again.

The land of the plantation was purchased by a French Creole in 1830 named Valcour Aime who later traded the land with his brother-in-law, Jacques Roman in 1836. Construction started the following year and was built entirely with enslaved labor.

The mansion was completed in 1839.

The most noted slave who lived on the plantation was named Antoine.

Antoine was a Creole Negro who was an expert gardener/grafter of pecan trees. During the winter of 1846, he succedded in producing a variety of pecan that could be cracked with one’s bare hand. In fact, the shell was so thin it was called the “paper shell” pecan.

Inventory of the estate at the time of Roman’s death valued Antione at $1,000.

After the death of Roman, his uncle and sisters put the plantation up for auction where it was sold for $32,800. (That is roughly $530k in today’s money.)

Oak Alley was a sugarcane plantation.

Sugercane was a labor intensive crop, much more so than tabacco or cotton, and plantations along the Mississippi turned to sugarcane as their main crop.

Around 110 to 120 men, women and children were enslaved at Oak Alley at any given time. This was not as large as some other area planters, but was still a significant amount at the time.

Life as a slave at Oak Alley meant working the fields and machinery for upwards of 18 hours a day. Inbtween plantings there were endless other tasks given to the workers, making everyday life exhausting, difficult, often violent and short.

Today 6 reconstructed cabins give insight into the daily lives of those enslaved at Oak Alley. The homes closest to the mansion were those of House Slaves who worked for the family on a daily basis.

House slaves were used for tasks around the mansion such as cooking, cleaning, serving and taking care of the children. Ultimatley, they were proof of the Roman’s incredible wealth.

Walking the plantation was an extremely humbeling are quite harrowing experiance. Knowing the history of the everyday working and treatement of the slaves left you with a deep, voided feeling.

“Those who deny freedom to others, deserve it not for themselves.”

Today Oak Alley serves a reminder of not only the beauty of the south, but the terrible heartache of so many souls that lived and died not knowing a day of freedom their entire lives.

Let us never forget our past, but more importatnly…

“If the cruelties of slavery could not stop us, the opposition we now face will surely fail. Because the goal of America is freedom, abused and scorned tho’ we may be, our destiny is tied up with America’s desity.”